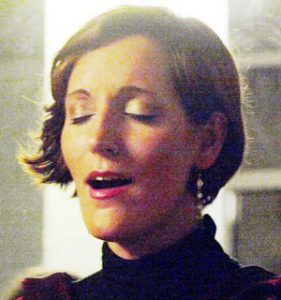 Born in Cádiz (Spain) in 1977, she started her music career at Orense’s Conservatory of Music where, in 1991, she discovered one of her biggest passions: singing. Besides her music studies (music theory, singing and piano) in the north of Spain, she graduated in translation and interpreting from the University of Granada in 2000 and speaks seven different languages.

Yolanda Campos, performing at the presentation of CANTICA

Yolanda has sung in quartets, octets and choirs with conductors such as Francisco Ruiz, Pablo Heras, Josep Pons and Harry Christophers.

Among her noteworthy concerts are: the recording of José García Román’s Stabat Mater for the Spanish national radio (Granada, 1995); Mozart’s Magic Flute at Granada’s renowned International Festival of Music and Dance (2000); cooperations with La Danserye in the Ecos del Templo y de la Corte (Echos of Temples and Courts) series of concerts around Andalusia (2006); or being in charge of the closing performance as a soloist at UNESCO’s conference on Education for the Third Millenium (Malaga, March 2013).

A highly versatile and expressive artist, she loves all music styles and has also worked as one of the main characters in Romeo and Juliet: the Musical for two years.

She has taught music and dance for 5 years in different international schools in Thailand to students between 3 and 16 years of age. She has also organised numerous music events both in Thailand and Spain, some of which have helped her raise money for charity institutions.

She is currently involved in diverse music projects and works as a teacher training organiser at the Teachers’ Centre in Malaga. She lives in Malaga with her husband and two children.